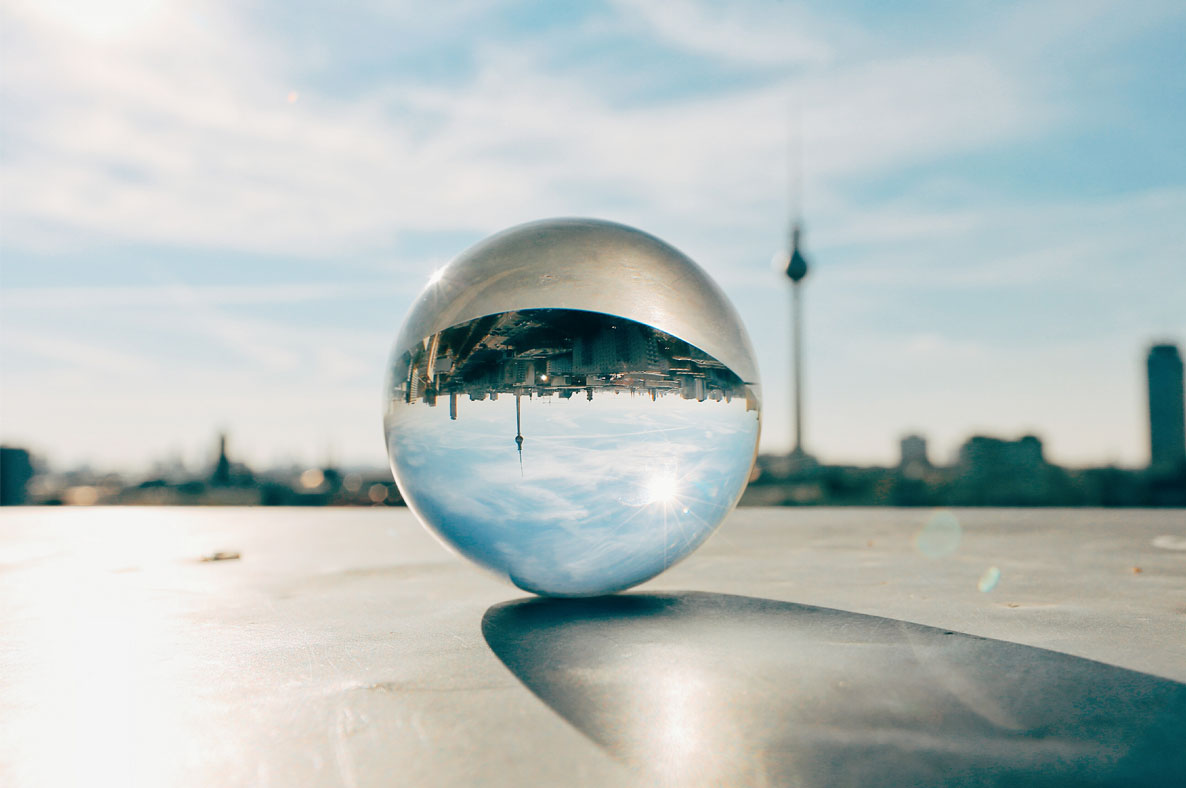 The developing image of continued economic growth in 2019 is slowly starting to form, but not without caveats. The domestic economy appears relatively healthy, despite a record period of expansion.

So far, we are seeing 40-year lows in unemployment, low inflation, strong consumer sentiment and better than expected initial reads on GDP as positives supporting the economy.

Beneath these shiny headlines lie a few concerns, such as wage growth, factory output and geopolitical risks. The global economic landscape is more mixed, as the European Central Bank continues to have to support its markets with low rates and accommodative monetary policy as growth languishes. Several areas in Asia, including China, are seeing their growth moderate as well, though their own stimulus may start having a positive effect later this year.

The major market averages have shrugged off many of these risks as the Nasdaq and S&P 500 hit all-time highs during late April and early May. These breakthroughs were achieved, even as S&P 500 earnings growth slowed to single digits in Q1, with more year-over-year earnings growth slowdowns projected for Q2. Earnings growth for the full year remains positive; we believe this comparatively low or negative growth will be transitory. Tough year-over-year comparisons due to the 2018 Trump tax cuts are partly to blame for the seemingly weak results, with outlooks further tempered by concerns over ongoing trade disputes and other factors that may restrict capital expenditures and growth initiatives.

At present, we feel that a cautiously optimistic tone is appropriate and will continue to monitor economic data and news as the year progresses.

Manufacturing surveys from the Institute for Supply Management and five Federal Reserve banks all fell in unison in December, while the ISM Purchasing Managers Index has been trending lower since August 2018. At the same time, yield curve spreads are expressing caution. These cautionary indicators were offset by the strength in earnings during the early part of the year as well as strong consumer gauges and GDP readings. GDP growth remains relatively strong, as equity markets make new all-time highs (see Figure 1). We believe that an economic recession is not highly likely in 2019, but we do see moderation in earnings growth and GDP into the back half of 2019.

One of the larger unknowns and risks to the bull case is the ongoing dispute with China over trade, intellectual property and general business restrictions for foreign firms.

Aside from the real costs associated with increased tariffs, mass media exposure imparts a stressful “minute-by-minute minutia” of trade negotiations that has added to its detrimental effects on markets.

A series of tariff elevations and increasingly bold rhetoric on both sides showed just how delicate these talks can be.

China has maintained an asymmetrical trade advantage for decades and a reset may be reasonable (see Figure 2), though challenging. It is extremely tough to change laws in China, and perhaps even more difficult for the enforcement of any agreed upon rules to ensure promises are kept and breaches addressed. These are only a few of the complexities that must be addressed during the negotiations before a deal is struck.

We believe the market has factored in some of these struggles, but we still anticipate an acceptable deal being attained, if not a favorable deal. A complete breakdown of talks and added tariffs would certainly force a reexamination of the bull case. 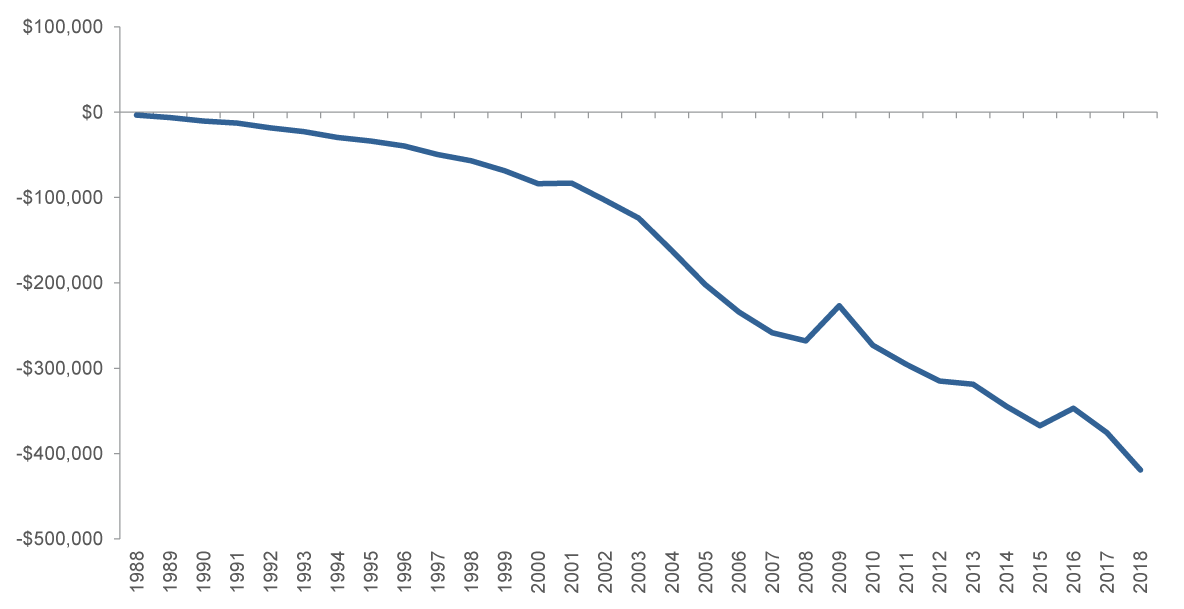 At 1.9% for the 12 months ended March 2019, inflation is just slightly below the Federal Open Market Committee’s (FOMC’s) target inflation rate of 2%.

In its early May meeting, the Fed confirmed inflation was subdued, and has maintained a more dovish interest rate stance since early this year despite an otherwise healthy domestic economy. We believe that inflation will remain relatively contained, holding at an acceptable range within the FOMC’s target rate.

Despite low mortgage rates, home values are also near or at record highs in most major metro areas, with rental rates elevated as well, adding to consumers’ cost burdens and potentially not fully reflected CPI readings due to their methodology. This underlying risk could impact consumer spending and GDP as higher housing costs, without corresponding increases in wages, limits growth in consumer spending, despite a solid employment backdrop. 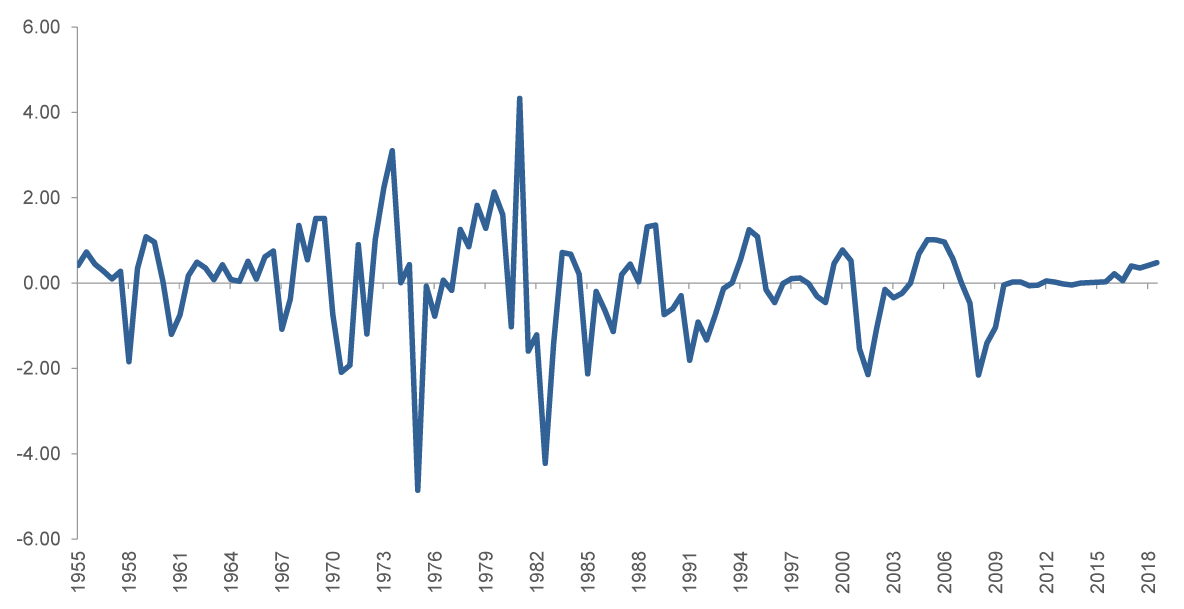 After dropping to a multi-year low in January, consumer sentiment rebounded quickly as economic fears receded.

Barring a complete breakdown in talks or a spike in federal funds rates above 2.5% (which is unlikely according to CME federal funds futures), we believe that sentiment and confidence will remain strong for 2019. 2018 ended with a record holiday season, and the consumer has little reason, other than perceived fears, to stop their spending.

With a robust jobs landscape, we do see pressure mounting for corporations who have been enjoying the relatively low wage inflation. Inflation-adjusted wages have been near flat for decades, with a growing vocalization of pressures from Washington. Higher minimum wages coupled with a tight labor market could compress margins as labor costs increase.